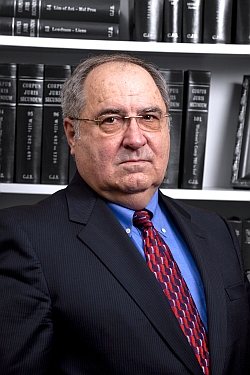 Office:
Fax:
(850) 224-8685
(850) 224-1254
Download Vcard
Mr. Thrasher is the founding partner of the Firm and was born in 1943 in Woodville, Texas. He received his undergraduate degree in Political Science from the University of Florida in 1965 and was commissioned as an United States Air Force officer at that time. The Air Force granted him a delay to attend law school and in 1967 he received his Juris Doctor as a graduate of the University of Florida College of Law. He was admitted to the Florida Bar later that year.

Thereafter, he served as an Assistant Staff Judge Advocate at Amarillo Air Force Base, Texas, and at the United States Air Force Academy in Colorado Springs, Colorado. While there, he also taught at the Academy's Preparatory School. Following his assignment at the Air Force Academy, Mr. Thrasher served as the Staff Judge Advocate at the United States Air Force Base located in Zaragoza, Spain. In 1973, he was honorably discharged from the Air Force and moved his family from Spain to Tallahassee, Florida, where he began the private practice of law.

In 1980, after seven years of practice with another Tallahassee law firm, he founded the Firm. He has devoted his practice primarily to Community Association Law, Creditors' Rights, Commercial Litigation, and Real Estate Litigation. Over the years, he has been an instructor on Creditors' Rights at the Florida Bar Conference of County Court Judges and privately sponsored continuing legal education programs.

Personal: Elwin lives in Tallahassee with his wife, Greta and is the father of Laura and Trey Thrasher. In his free time, Elwin loves to travel, snow ski, and follow Florida Gator sports.

The hiring of a lawyer is an important decision that should not be based solely upon advertisements. Before you decide, ask us to send you free information about our qualifications and experience. Terms and Conditions of Use.